A look at the trains that built the O.C. Coast, from… The OC! 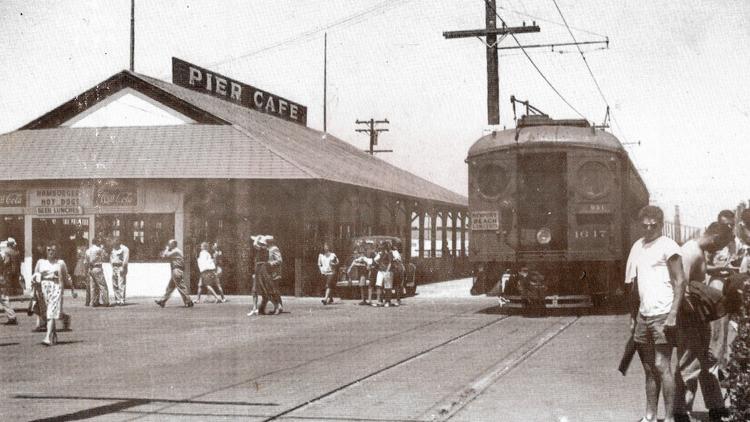 As O.C. officials are considering building a new streetcar line, here’s a history of the county’s rail lines
As Los Angeles began building rail lines three decades ago, Orange County shrugged. Instead, the county built a network of toll roads.

But it wasn’t always that way.

As O.C. officials consider building the first new streetcar line in a century, here’s a brief history of Orange County rail from The Times archives:

The rail line connected the Newport Beach wharf — at the site of today’s Newport Pier — to downtown Santa Ana. The 11-mile line was completed in 1891. The train tracks extended the length of the wharf, jutting 1,200 feet over the ocean, where cargo ships delivered and picked up goods. A passenger depot was built on the wharf over the breaking surf.

The train, which chugged down a route that roughly parallels what is now the Costa Mesa Freeway and Newport Boulevard, reached the wharf in just 25 minutes. The railway annually carried 70,000 tons of cargo and about 12,000 passengers eager for a day at the beach.

In fact, the introduction of the Santa Ana & Newport Railway, which made three round trips a day (except Sunday, when the line was closed), with connections to Los Angeles, established Newport Beach as a summer resort. Until Henry Huntington’s Pacific Electric trolleys reached the Balboa Peninsula in 1906, the Santa Ana & Newport Railway provided the only line to coastal Orange County.

Regardless if PER was a sound investment, LA had a system in place that envy the world. PER operated beyond county line, were Metro ends at county line, and PER stretched to Newport Beach and even Redland, which was super amazing. Now, LA is spending billons creating a system that only…

The Southern Pacific Railroad acquired the Santa Ana & Newport Railway in 1899 and diverted much of the freight traffic to San Pedro, a bad break for the Orange County economy in the early part of the century. But the lack of commercial traffic ensured the area would retain its resort qualities and become the tourist mecca it is today.

This was a wheezing, smoke-belching trolley operated by the Santa Ana, Orange & Tustin Street Railway. The line, which started operating in 1888, eventually was incorporated into the elaborate network of the Pacific Electric trolley system.
Operated by the Inter-Urban Railway Co., the Orange Dummy’s wheels were set so close together that riders could easily make it rock back and forth. Male passengers were expected to lend a hand when cars slipped off the rails or needed a push.

The dummy ran from the Santa Fe depot in Santa Ana west along 4th Street to Ross Street, then back to Main Street, then north to La Veta Avenue, then east to Glassell Street and north to Orange’s downtown plaza.

The motorman would stop for passengers anywhere along the route. The whole trip took about 30 minutes.

Huntington’s Pacific Electric system rolled into Orange County around the turn of the century, and nothing would be the same.

The Pacific Electric Railroad reached the town of Bay City, which would become Seal Beach in 1915, followed by Huntington Beach and eventually Newport Beach.

The arrival of the railroad, coupled with an extensive advertising campaign, set off a real estate boom, and lots that a year earlier had been worth $200 tripled in value. Amusement parks were built in Seal Beach and Newport Beach, which both became popular weekend destinations for L.A. residents.

Today, a restored Red Car sits on what was once the old Pacific Electric right-of-way in Seal Beach, a rare reminder of the trains that help build the Orange County coast.