Cold Spell Heats Up House Searches in Warm-Weather Markets… from Newport-Mesa, The OC!

The start of 2014 brought plunging temperatures and record-breaking lows in many parts of the country. It’s the kind of weather that makes migrating down south seem like a good idea.

And it turns out that, the colder the temperature, the more house hunters seek out warm-weather locales like Miami and Phoenix, says Jed Kolko, chief economist and head of analytics at real-estate website Trulia. 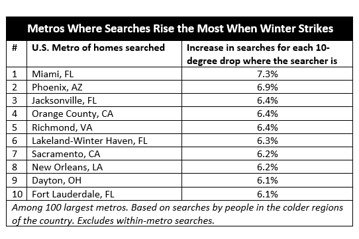 Trulia analyzed online searches originating from metro areas where the average daily January temperature was below 41 degrees Fahrenheit between Dec. 1, 2013, and Jan. 21, 2014. Those cold weather metros are in the Northeast, the Midwest, Plains and Mountain states and even some of the South. Trulia used temperature data from the National Climatic Data Center.

Most of the metro areas that see the highest increase in searches are in the South and West. At the top of the list is Miami, which sees a 7.3% increase in searches from cold-weather dwellers for every 10-degree drop in temperature. Following is Phoenix with a 6.9% increase and Jacksonville, Fla., with a 6.4% increase. House hunters aren’t shunning colder areas completely, though—Dayton, Ohio, also made the top 10 list.

The boost is even larger for warm vacation areas, which are defined as areas where vacation homes account for at least 25% of the housing stock, according to the U.S. Census.

These findings fit an overall trend of people flocking to the South and Sunbelt, where population and housing stock has increased over the past century, says Edward Glaeser, a professor of economics at Harvard University. Medical and technological advances have made it easier for people to live in warmer climates and encouraged more economic growth and centers of business, he adds.