Foreign buyers and executives from other industries, chasing big returns, get in on the act of real-estate flipping

There is a new breed of quick-change artist on the real-estate front: luxury flippers who focus on high-end properties. 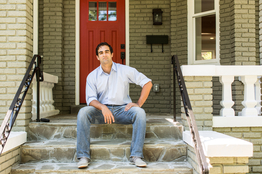 FLIPPED OUT: Jordan Ghrist bought a four-bedroom in Washington, D.C., for cash, gutted it and resold it after three days on the market at an estimated 28% profit.

Popular before the housing bust, house flipping—where a property is bought, renovated and sold quickly to make a profit—is seeing a comeback nationwide. Rising prices and tight inventory are driving more investors to the upper end of the market. Flips of homes priced at $1 million or more shot up 35% in 2012 compared with 2011, according to market researcher RealtyTrac.

“Investors have actually run out of inventory on the low end of flips, and now they’re moving to the higher end,” says Daren Blomquist, vice president of RealtyTrac. The million-dollar homes are “the untapped market.”

Some new players are behind the uptick: foreign buyers, institutional investors and professionals who have made money in other industries.

“In this market now with these numbers, everyone thinks they’re going to catch the next wave,” says Zar Zanganeh, a real-estate broker in Las Vegas, adding that he gets three times as many requests for homes to flip now than a year ago.

The property was purchased in January 2012 for $1.2 million by an investment group led by an American and backed by Venezuelan, Brazilian, Colombian, Russian and French investors. They renovated the kitchen and bathrooms, installed top-of-the-line appliances and lighting, and decked it out with luxury finishes.

The renovations cost almost $1 million, she says. Now it is on the market for $2.98 million.

In Washington, D.C., Beth Hughes, a real-estate agent with DCRE Residential who finds homes for flippers, last summer found a 2,000-square-foot house in Columbia Heights for Jordan Ghrist, president of Level One Development LLC. He bought the four-bedroom, 3½-bathroom house for $461,500 and gave it a “total gut job,” he says. Mr. Ghrist has a $2 million fund so he can pay with cash.

The house went under contract for $805,000 about a month ago after a mere three days on the market. The sale is expected to close this week—netting about 28% in profit, he estimates.

Flipping high-end homes can be particularly challenging. Selling a luxury property can take longer than a midprice home, and renovation costs can be steep, because high-end buyers expect to be wowed. Plenty of flippers have lost money. RealtyTrac data show that in Naples-Marco Island, Fla., for example, flippers who purchased homes for $1 million or more lost 14% of their investment when the property sold within six months.

“These aren’t paint-and-lipstick jobs. Basically, you have to re-envision the entire house,” says Mr. Bartlett, who flips single-family and multifamily homes with a team of partners, including Eric Sussman, senior lecturer at the Ziman Center for Real Estate at the University of California, Los Angeles.

Mr. Bartlett recently bought a 1,850-square-foot modern house in Los Angeles’s Hollywood Hills for $690,000. He then spent $50,000, mostly on cosmetic changes, adding walnut flooring and railings, maple cabinets and granite counters in the kitchen, a new wet bar, and fresh paint. He expects the house to close this week for $888,888—at a 20% profit.

When buying a home to flip, Mr. Bartlett says he first considers the foundation, roof, electrical system, plumbing, and heating and air-conditioning. “That’s where you really drop all your money when you fix a house,” he adds.

For materials, Mr. Bartlett shops at outlet and wholesale stores. He looks for sales and asks for deals. In the Hollywood Hills house, he wanted a white-patterned decorative tile, but designer-name versions were too pricey, from $40 to $77 per square foot. Instead, he opted for a generic wall tile that cost $3.82 a square foot. For the wet bar, he chose a generic black tile that cost $1.99 per square foot and a porcelain tile in sea-foam green instead of glass.

For items that people see, such as appliances and fixtures, he’ll buy brand names. Sometimes he buys in bulk. “Costco COST +0.28% had really, really great Hansgrohe bathroom faucets for $70 each. I took 20,” he says. “I don’t know yet where I’ll use it, but I know I’ll use it. And when a buyer comes into the house, he’ll see Hansgrohe.”

High-end flips are particularly gaining traction in the markets hardest hit during the downturn. Investors could scoop up homes at big discounts in areas that now have some of the highest home-appreciation rates. Some metro areas have seen more than a sevenfold increase in million-dollar flips over the past year, although million-dollar homes make up less than 1% of all flips, according to RealtyTrac data.

In Atlanta, property appraiser Dan Fries says the $1 million homes he appraises are typically valued for $250,000 more after they are flipped, depending on whether the changes improve the house functionally or are purely cosmetic. Sometimes, he says, investors earn back five times the amount they put into renovations.

In recent months, high-end flippers have had to be creative in finding homes. Mr. Bartlett, the Los Angeles flipper, bought a house in Rancho Palos Verdes after a friend told him the owner had died, and his family, who had inherited the property, lived out of town. The property had been vacant for six months and had water damage. He called the family’s real-estate agent, who sold the property to him for $825,000.

He plans to spend $200,000 to create an open floor plan, reconfigure the master bedroom, redo the landscaping and put in air-conditioning. Normally, he doesn’t take on houses that need a complete overhaul, but he expects this one to sell for $1.4 million, a 37% profit, he says.

Lloyd Segal, a house flipper himself and author of “Flipping Houses,” a guide to buying and fixing houses, finds homes through bankruptcy courts, probate courts, courthouse auctions and people in his network, to whom he’ll pay an assignment fee.

Sometimes he just drives around Los Angeles to scout properties. That’s how he found one of his latest homes, which he bought for $2.85 million. “I was late for a date and driving like a maniac through Hollywood. I see this little sign that said ‘For Sale’ and a phone number,” says Mr. Segal, adding that he immediately pulled off the side of the road to call. “I was late for the date. You can see my priorities. Don’t tell anyone that.”