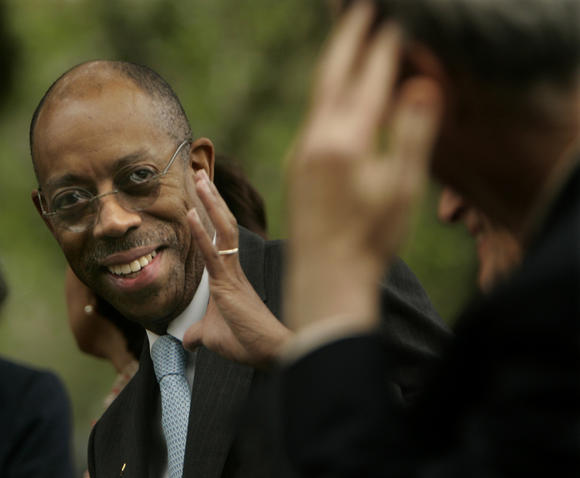 Michael V. Drake, chancellor of UC Irvine, is expected to be named the new president of Ohio State University.

Drake, who has been chancellor at UCI since 2005, is expected to be introduced at an Ohio State Board of Trustees meeting Thursday afternoon, according to the Columbus Dispatch. His hiring is expected to be approved, and he would begin as president in June, the Dispatch reported.

University officials in Ohio declined to comment Thursday morning and said that nothing had been decided.

Drake, 63, would be Ohio State’s first black president and would replace former president E. Gordon Gee, who retired in July, the Dispatch reported.

UCI spokeswoman Cathy Lawhon told The Times that the university cannot confirm or comment on Drake’s possible departure “until after the OSU trustees vote” later Thursday.

Drake’s 2005 hire was just months after failures in UCI’s liver transplant program led to more than 30 patient deaths. Since then, the university has built a new hospital and worked to restore the image of its medical program.

UC Irvine’s applications for undergraduate admission have risen more than 90% since Drake’s appointment and the four-year graduation rate has increased by more than 19%, according to the university’s website.

Drake’s other accomplishments include overseeing the opening of the first new public law school in California in more than 40 years. The UC Irvine School of Education was also established in July 2012. source Daily Pilot